Coding seems like such an advanced topic when we were young. I didn’t learn to code until high school, though I did spend a lot of time coding in college because I was an electrical engineer major.

Nowadays, kids learn to code as early as age 5!

Don’t panic if the thought of teaching your child how to code sounds like an insurmountable task. Like I told my 6 years old son, coding is basically learning to speak machine language, just like how you learned sign language when you were a baby and how you are learning French and Chinese now.

My son was super excited to hear that he gets to learn how to program a robot or computer to do what he wants. But before we jump into inserting codes into a machine, we first have to learn the basics of coding. And what better way to do it than through our beloved LEGO blocks!

Benefits of Teaching Your Kid to Code

The biggest reason why learning to code is important for kids is that computer programming is the future. With such rapid advancement in technology, knowing how to code drastically increases your kid’s future employment opportunities in various industries.

For me, the most important reason for teaching my kids to code is that programming helps children learn logic and problem-solving. When you are writing code to tell a robot what to do, you need to derive the steps necessary for the robot to get from point A to point B. And sometimes, there are multiple ways the robot can travel from A to B. Learning to code helps your kid think creatively to come up with different ways for the robot to travel and the logic for the robot to do so in the shortest, most efficient way.

Coding is also fun for kids. It’s like solving complex mazes or difficult riddles. If you don’t believe me, try the LEGO binary alphabet coding activity below!

How to Code Binary Alphabets with LEGO

I LOVE machine codes! It’s one of my favorite classes in college. The reason is that binary numbers are so simple and logical – you just use 0’s and 1’s!

First, I do want to point out that machine codes are typically 8 characters and consist of 8 binary numbers. I have reduced the codes down to 6 characters because the LEGO baseplate is not that big, so using 8 LEGO bricks per letter will seriously limit how many words you can spell on one line.

I was pleasantly surprised at how fast my 6 years old learned to spell using binary codes. He had a blast spelling out words that only I could decipher using the binary alphabet conversion chart so that we could pass secret messages to each other.

We started reviewing his sight words like “have,” “are,” and “here” with the LEGO codes. Talk about killing two birds with one stone! And the best part is that he truly had a lot of fun and was excited the whole time we were practicing coding. 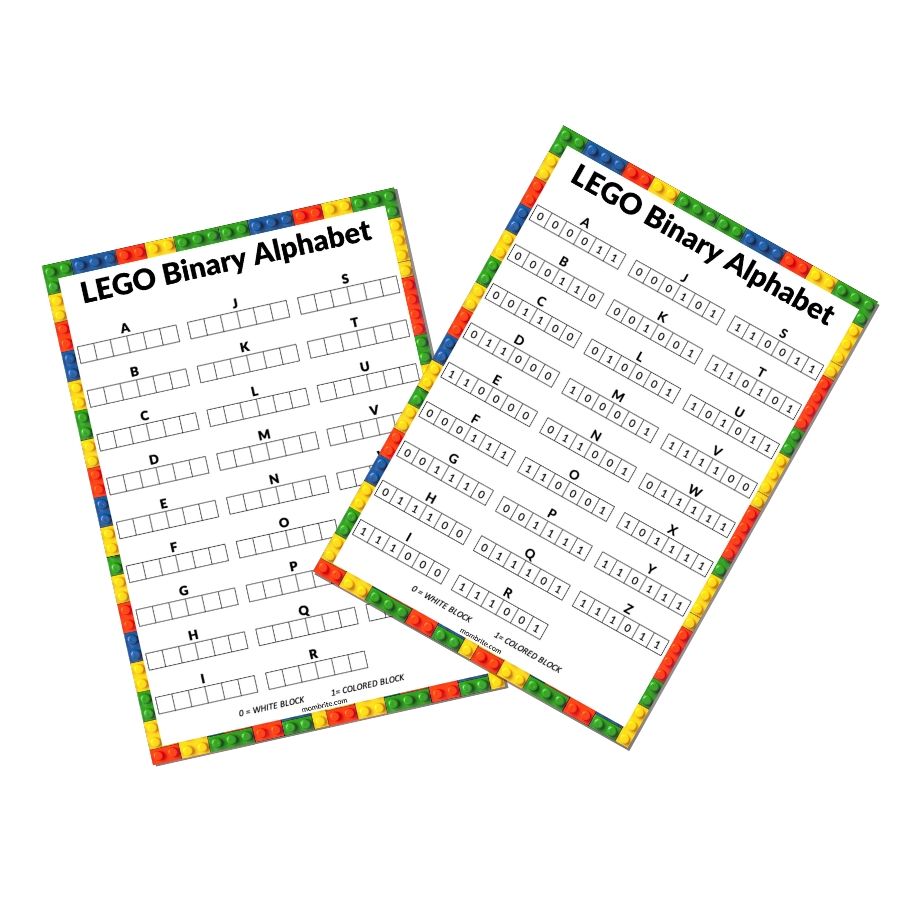 Enter your e-mail below to join the newsletter and get your FREE printable!

Next Level Up in Coding

I have created for you the alphabets in binary codes in the free printable. However, your child can come up with completely different binary codes for each of the letters. There are so many ways to shuffle the binary numbers around that your child can repeat this activity until he masters it.

The second page of the free printable has a blank template for your kid to fill out the binary numbers.

The challenge is that no two letters can have the same combinations of 0’s and 1’s (technically, permutations because the order does matter, but that’s for the math nerd in me to grumble about). You can explain to your child that if you have the same binary codes for two letters, the robot will be confused about which letter you want. In which case, the robot will return an error message and malfunction.

Kids are never too young for coding! Even my 4 years old had a lot of fun putting the blocks in a row and then going one by one, saying whether the blocks are 0’s or 1’s out loud.

When your kids are in elementary school, think of coding like logic puzzles rather than complex computer programming. They are learning the basic building blocks of coding that will train their minds for more complicated programming in the future.

Betty Boiron is a busy homemaker, former engineer and teacher, and homeschooling mom of two. She strives to teach her kids through fun, interactive activities, and hope to help others do the same.